MY FIRST BEYONCÉ CONCERT | The Formation Tour + Why you shouldn’t sweat NOT having Floor Seats! – AllThingsBee
My LifeStyle

MY FIRST BEYONCÉ CONCERT | The Formation Tour + Why you shouldn’t sweat NOT having Floor Seats! 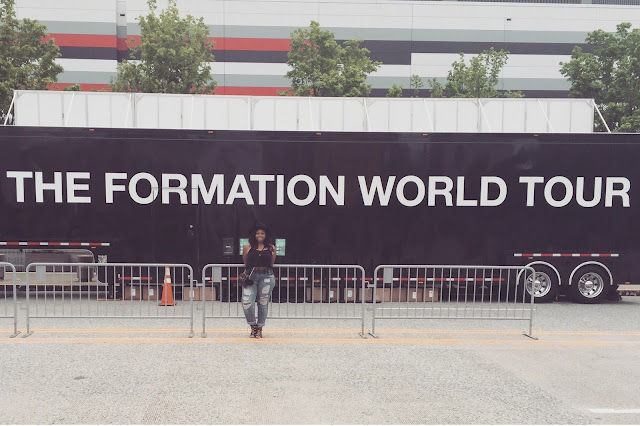 I was standing in the middle of Best Buy last week when my husband handed me his phone and said, “look at this real quick.” All I saw was “Beyonce” and ” Section L Row 1″ and flipped out. My dumb ass started jumping up and down and silent screaming in the middle of the store. I’m literally laughing while typing this. I know I looked so silly, but I could not contain my excitement. I’ve loved Beyoncé ever since my big sister bought me Destiny’s Child first single on cassette tape back in the 90’s, ” You be saying no no no no no, when its really yes yes yes yes yes…”. I’ve dreamt of this moment ever since I was a kid. Floor seats?! My husband scored major points with this and I wanted to take him home immediately if you know what I mean. HeHe #marriedlife
First off let me say, Bey came to SLAY and so did I! The goal for my outfit was to look super cute and be comfortable at the same time. Here’s a quick pic of my outfit that I scored in Forever 21’s plus size section the day before the concert…
I wore this cute crop-top with fringe detailing, distressed jeans and my “ok ladies now lets get into formation” hat all from forever 21 for about $50 total. My Jesus sandals are from Shoe Carnival ($27). I strongly suggest that you do NOT wear heels. You are going to be standing and walking a lot to get inside. Also, its nearly impossible to sit down at the concert when she’s performing hit after hit.
At the end of the concert my friend and I got a huge kick watching girls walk back to their car. Please, don’t do it to yourself. Dress comfortably so you can enjoy the concert and not have to think about your feet. I know we want to look cute for Bey, but honestly, she can’t see you or your Christian Louboutin’s. Leave them at home….
HANDBAGS. LEAVE THEM AT HOME!!!!
Again this was my first major concert and had no clue. Listen to me. Bringing my (yet small) purse, caused pure hell. I’m not even going to go into detail. Please listen to me when I say leave your handbags at home. Only bring a wristlet and make sure its no bigger than your hand (LITERALLY NO bigger than your hand) or they will make you check your bag. You do NOT want that to happen.
THE CONCERT
Was fantastic. It was everything. I don’t know what else to say because I don’t want to spoil it for those who have yet to attend. Atlanta was her 3rd stop on the tour and she’s far from finished. I will say that she did perform many songs from her latest album, “Lemonade.” As well as songs from her past albums like “Me myself and I” and “Halo”. The only songs that she did not perform that I was dying to see live was Love on Top, Resentment, and from her new album, 6 inch! That’s my jam and I kept waiting for it to come on. It never did. However her performance to “Freedom” is amazing. Put your phones down and take it all in. I’m going to attach my snapchat story from the concert down below so you can get a feel for the concert if you care to see. Also, you can get an idea of how close I was to the stage. Make sure you check it out. Speaking of floor seats…
FLOOR SEATS | A Blessing and a Curse
I really wanted to write this for my people who could not afford or weren’t lucky enough to score floor seats. Don’t get me wrong, it was super cool to be so close to Beyoncé! I mean, look how close I was…. 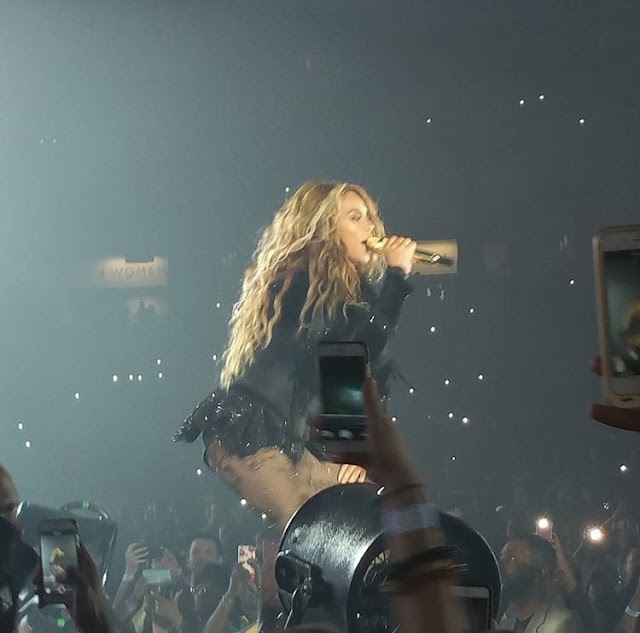 I mean, how amazing is this?! To be this close?! It was awesome and kinda worth all the drama. Yes, my floor seats came with a heavy dose of DRAMA. Maybe it was only like this in Atlanta because the Georgia Dome security/ floor workers were terrible. You could tell they didn’t know what the hell they were doing. Also, this is HOTLanta and the workers were black…so when T. I, Future, Ludacris, and Rick Ross came out with DJ Khaled they quit working and began enjoying the concert with the rest of us. (I was mad, but then I wasn’t either. I probably would’ve got fired this night for having too much of a good time while on the clock).
What made my seats Amazing:
What made having floor seats AWEFUL:
I came to say all this because I wanted to be on the floor so bad, and even though I had an amazing time, I’m almost sure I would’ve had a better time in the bleachers. The clips of people higher up looked like they were having a ball while I was on the ground having a not so great time. I focused on the positive as much as possible. I wasn’t about to let them ruin my first Bey concert!
If all you could afford was a seat up top, in the bleachers, then you’ve got the best seat in the house. The only way I would say that floor seats would be worth it, is if you were literally front row and center of the stage. Away from the isles. That way no one can push you out of your seat…
Also, I want to encourage you as hard as it may be to put your phones down. I did snap a lot and it seemed as though I was on my phone a lot, but I wasn’t. When a song came on that I liked I would snapchat really quick and then put my phone back in my pocket. I just wanted to be there and not watch the concert through my phone. If I wanted to do that I would’ve told my husband to save his money and I would watch the concert through the hashtag. Speaking of, I did go look up clips on Instagram. There was this one clip of Beyonce squatting down literally singing to a fan and the girl never put down her phone. Beyonce was in here face and she never put her phone down to make eye contact! That blew my mind. I wanted to slap that phone out of her hand so bad. She missed an amazing opportunity to connect, even for a second with our generations “Michael/ Janet Jackson.”
Again check out my snapchat story and I hope you have an amazing time attending the Formation Tour! Even though the floor was nothing but drama, I had a blast. Whenever she comes back to ATL I will be right there in the bleachers enjoying myself. Leave the floor seats to the crazy fans (unless you get front and center stage seats…get those!!!)
S N A P C H A T  | @AllThingsBee
Until next time,
<3 Bee
MY FIRST BEYONCÉ CONCERT | The Formation Tour + Why you shouldn’t sweat NOT having Floor Seats! was last modified: July 9th, 2017 by Bee Wade
0 comment
0
Facebook Twitter Google + Pinterest

No images found!
Try some other hashtag or username